Ten-Year Projections for US Agriculture

The USDA has recently released its Long-Term Projections Report, which provides an outlook for agricultural and commodity markets as well as economic growth for the upcoming decade. According to the report, global real economic growth is projected to average 2.7% annually from 2020-2029, and the United States should see an annual economic growth of 1.8%. With this continuous economic growth in the US, stronger growth in developing countries around the world will lead to a slight decrease in the US share of global gross domestic product. The steady increase of global economic strength will ultimately lead to long-term gains in world food demand, global agricultural trade and demand for US agricultural exports.

Experts anticipate corn production in the US will grow over the decade due to rises in yields and prices that are likely to encourage planting corn over soybeans. In addition, expanding meat production is projected to increase demand for corn-based feed products. Estimated planted area will increase sharply in the short-term but will likely see a slight decrease and then remain relatively steady throughout the remainder of the decade. Corn-based ethanol is projected to see a rise in production slowly over the next ten years. While the US is expected to see a decline in domestic ethanol consumption, increasing ethanol exports are projected to offset the trends in domestic use. Throughout the decade, corn yields are expected to rise from 178.5 to 196.5 bushels per acre, and prices are predicted to rise gradually from $3.40 to $3.60 per bushel.

When compared to the previous five-year average, wheat production in the US is expected to see a gradual decline in planted acres due to slow growth in domestic use and exports. Rising global incomes support the increase of global wheat trade, while the US export growth is tempered by price competition coming from Russia, Ukraine and the European Union. When these competitors experience reduction in wheat supply, the US is positioned to increase its wheat exports. Wheat yields are expected to rise from 48.2 to 51.8 bushels per acre, and prices are expected to rise from $4.80 to $5.15 over the next ten years.

After experiencing sharp deceases in soybean production due to weather-related and trade issues from this past planting season, US soybean plantings are projected to increase and remain steady over the decade, supported by slowly rising prices and net returns. A growth in domestic demand for soybean meal and oil will lead to an increase in crush over the coming years. Throughout the decade, the US is expected to lose global soybean market share to Brazil and Argentina, dropping from 34% to 32.5%. Soybean yields are expected to rise from 50.5 to 55.5 bushels per acre, and prices are expected to rise from $8.85 to $9.05 throughout the decade.

US rice production is predicted to rebound 14% in the coming year, followed by a 10% drop in the following year to 2.6 million acres planted. From there, production is expected to remain steady at 2.60–2.65 million acres planted throughout the decade. Long-grain rice, the dominant class produced here in the Delta, should account for nearly all the area of change over the decade. Domestic consumption of rice is expected to remain the primary component of demand. Experts anticipate demand for imported rice from Asia will grow about 1.1% annually. US rice exports are expected to expand slightly after the coming year before leveling out in 2027 for the remainder of the decade. Over the course of the next ten years, long-grain rice yield is expected to increase from 7,545 to 7,891 pounds per acre, and prices are expected to rise from $10.50 to $11.90 per cwt.

Projected cotton prices should begin the decade at $0.62 per pound and finish the decade at $0.72 per pound. In the coming year, farmers are expected to plant 11.8 million acres of cotton, which should increase to 13.3 million planted acres by the end of the decade. The US is projected to remain the world’s largest exporter of cotton with exports expected to grow from 15.5 million bales to 18.5 million bales by the end of 2030. However, estimates of strong export growth in Brazil and Australia may lead to a slight decrease in US global market share. Cotton yield is expected to rise from 845 to 890 pounds per acre, and prices are expected to rise from $0.62 to $0.72 throughout the decade.

For the report please see:
https://www.ers.usda.gov/topics/farm-economy/agricultural-baseline/ 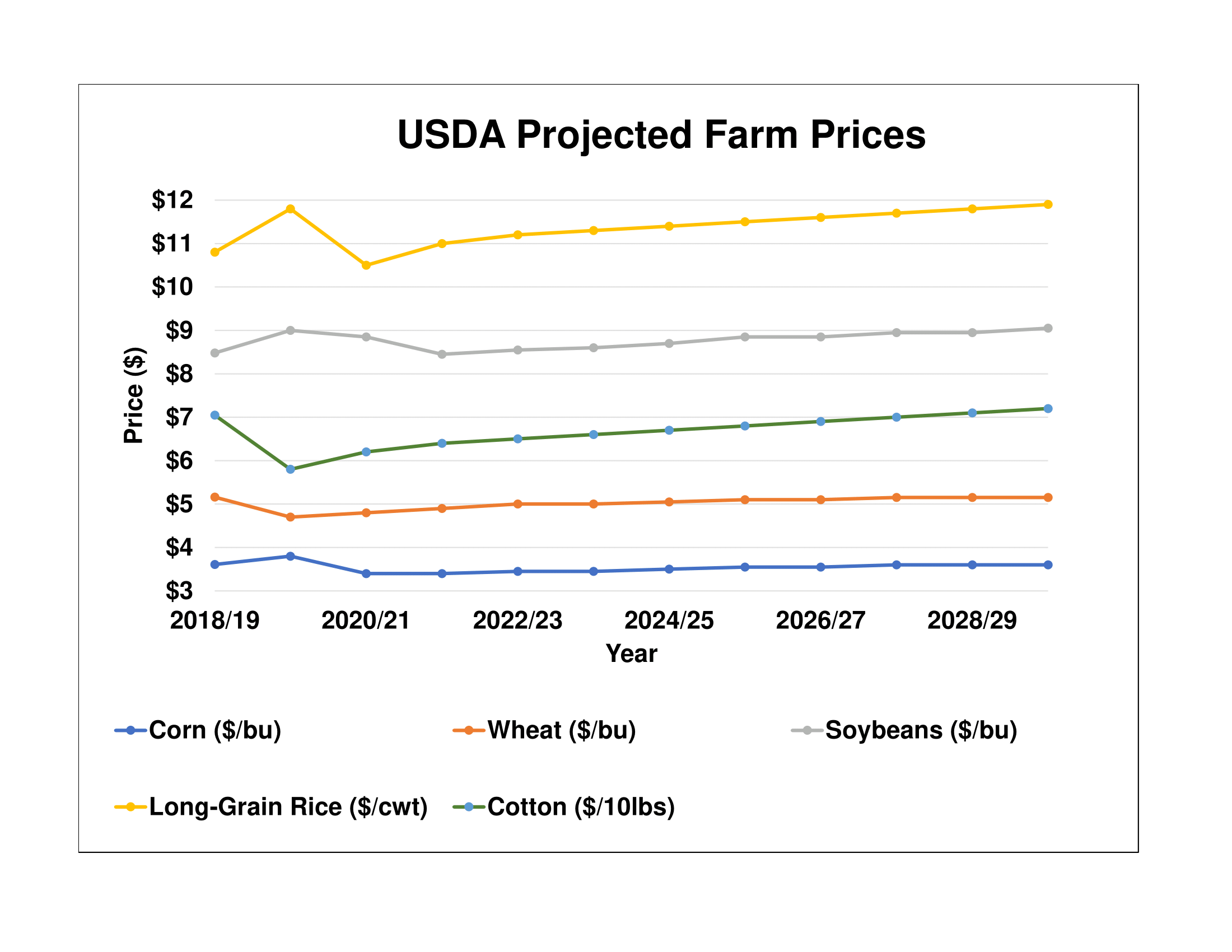